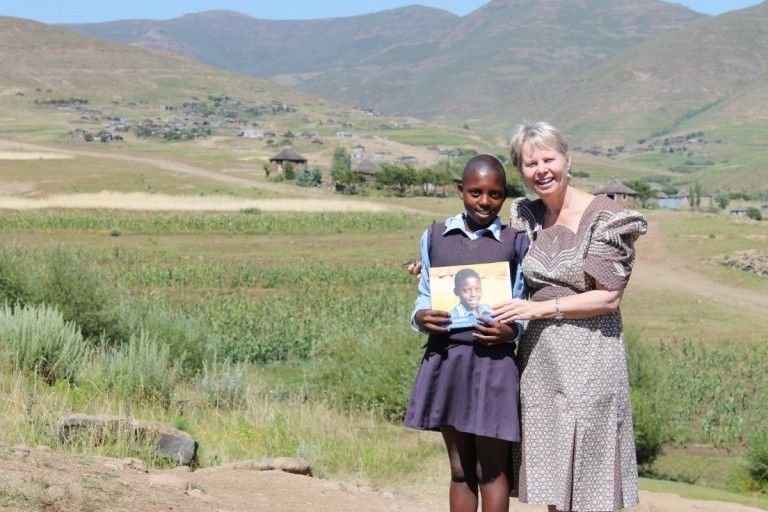 As many of you know, I wrote a children’s book last fall in honour of the gender equity theme of our 10th Anniversary. My objectives were to:

In Thaba Tseka last week, I had the long anticipated chance to show the heroine of the story, young Nthati, this book about her life. 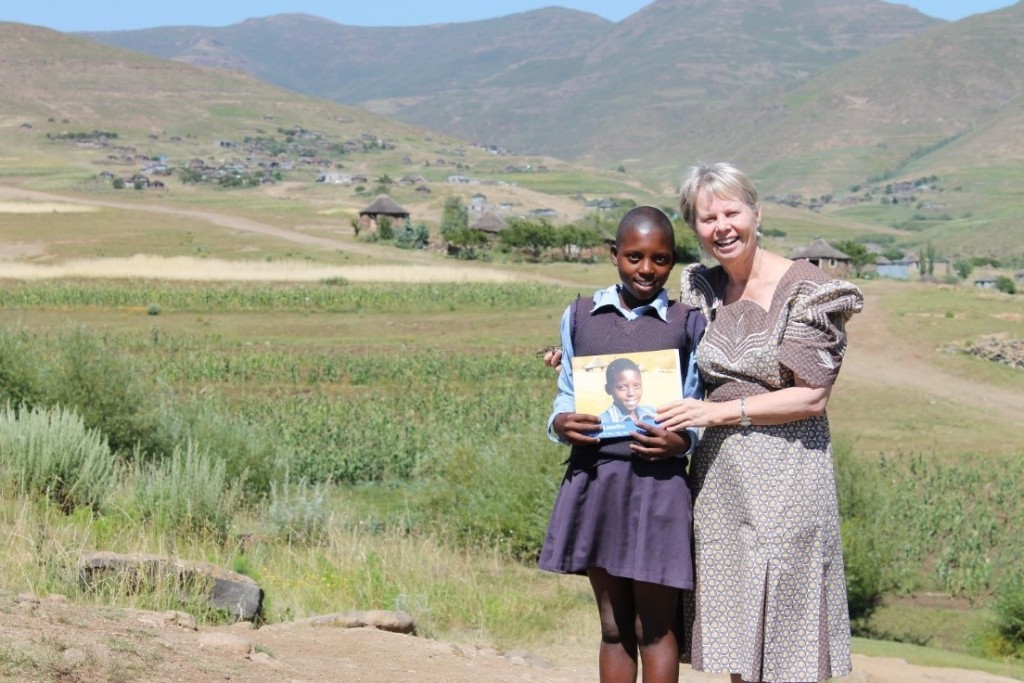 When she saw the cover – her face lit up! I sat quietly while she read every page. I needed assurance from her that she was happy with what I had said about her life and her family. I needed her to know that this would make her famous and assurance that she was OK with it.

I watched her carefully pour over every page with full concentration. I was spell bound watching her. I had another copy in my hand and turned the pages at her pace so that I might infer her reaction to each photo and page text. She was – as they say here – over the moon! I will never forget it.

As Hilary and I went from school to school, we saw Help Lesotho’s hand washing posters in classrooms, offices and pit latrines.

Our school project this year has been water and sanitation hygiene educational program in 20 schools. Each participating school has built a simple hand washing station that has a bucket of water with soap and a bit of chlorine, and a tiny cup with a perforated bottom outside the latrines. Our Canadian partner schools paid for their Basotho schools to have this opportunity, and a local partner, USAID, paid for the other schools.

Friday was the graduation ceremony from our computer classes. We make a huge deal out of the graduations from our programs as some participants may never have graduated from anything – ever. This was a combination of three classes in this session – the largest ever, made possible because of some computers and chairs donated by UNFPA.

The 50 graduates ranged from 32 youth, to 13 pre-school teachers (who often have only a grade seven education), to a gentleman who looked to be in his sixties. Good for him for trying something new. They came early, very dressed up and looking so smart.

For the first time we have broken the tech gender barrier with more women than men in the class – a full 70% female.

There were also five police officers – which is exciting to know that these men received our vital training on gender equity and conflict resolution. Ironically, I was stopped last week in a routine road check. When the police officers saw the Help Lesotho logo on the truck, they asked me about how they could be enrolled in the computer classes! The police department is so supportive of this training that it gives the officers time off to attend.

The computer classes are more than just learning to type or use various programs; the classes also include life skills training to help participants learn how to communicate, how to make healthy decisions, and how to set goals and move forward with their lives. Most of the participants have no means of employment, and no funds to attend training courses to enhance their skills. Now, because of Help Lesotho and the Facet Foundation – program like this are free and open to everyone. As you would expect, we have a long waiting list for these courses.

Several brave participants gave heartfelt speeches about the skills they learned in the computer training and the life-changing impact the life skills component has made on their lives. One group did a skit on gender-based violence and how to respond to it. They were so proud.

One woman, perhaps in her mid- thirties, a mother of three children, the eldest of whom was about 17, told the whole group that she had been raped and never told a soul.

She felt she had no right to speak of it and she had to endure. She shared that she had been married to a brutally abusive man who went off and left her with three children to raise. She picked herself up, saved and built herself a little house for the family. Her husband came back recently to claim the house as his.

She literally beamed as she shared that the life skills component of the program had taught her that she had rights, that she was a valuable person and could take a stand against abuse and injustice. We were breathless at her bravery to stand up and speak out about her pain and her goals;

“Now I know that I did not cause these bad things and I do not have to take this treatment. I now know how to stand up for myself – and my children – and I will! Because of what I learned in this course, I went to legal aid, got a lawyer and am going to fight this evil man. I will do it!”

Another young looking woman told me that she completed our young mother’s program and had learned how to take care of her baby and not pass her AIDS to the little one. She also completed our Women’s Arts and Crafts program and was selling the things she learned to make. She said that now, because of the computer training, she was going to start a very small business (gesturing with her fingers about 2 mm apart!) to make business cards and nice things for people because she knew the software.

Several men told me they were no longer afraid to test for AIDS or get treatment and that this had changed everything in their lives. They would now tell their wives they were HIV positive and be more compassionate to others who had the virus.  Truly it was a good day. As they danced and posed for group photos, their pride in themselves brought tears to my eyes.   …as it does now as I write about it.

I am excited to tell you what happened after my appeal for support eye surgery mentioned in my last letter.

You will be amazed to know that one wonderful women on Vancouver Island wrote to commit to the first 20 surgeries, others came to add one after another so that as of this writing there are for 31 grannies who will have their sight restored!

Thank you so much – only $5,000 more to do the rest. We were all overwhelmed at this generosity – this is what gives us energy and keep us all going.

My very best wishes to you all,

Read Peg’s other 2015 Letters from Lesotho