I know you are as excited as I am at the advent of spring – it has not come too soon! I imagine you are planning gatherings and trips, hopeful to satisfy some of those longings. I am booked and looking forward to a hiking trip for a week in the Rockies in the first week of April – it has been so long …. I can’t wait!

I have so much to share in this letter that I will get right to it. Note that I am including two videos of our beneficiaries that are well-worth a few minutes of your time (about 11 minutes total running time).

Firstly, our staff have done a terrific Annual Report for 2021 (fiscal year ends June 30). It is quick, visual impact reporting on our work during a very challenging year. The financial charts on this page tell you exactly where your money has gone – https://helplesotho.org/financials/.

As you know, we have a vibrant program for pregnant girls and young mothers. One incredibly generous woman in Canada sponsors a major portion of the program and UNICEF another section so we can reach more girls. The program is holistic, dealing with pre- and post-natal issues, breastfeeding and nutrition, sexual and reproductive health, emotional challenges, conflict resolution, and managing the stigma of having babies so young. The girls also learn to start a small business in their villages. Over the years, the program’s reputation has grown so that UNICEF regularly uses it as an example in other countries and sponsored the production of this video which introduces you to these dear young woman as they speak for themselves.

The world just celebrated International Women’s Day. It is exciting to see the changes and concurrently disappointing to see the lack of progress. Our staff and beneficiaries honoured the day by striking the ‘Break the Bias’ pose! 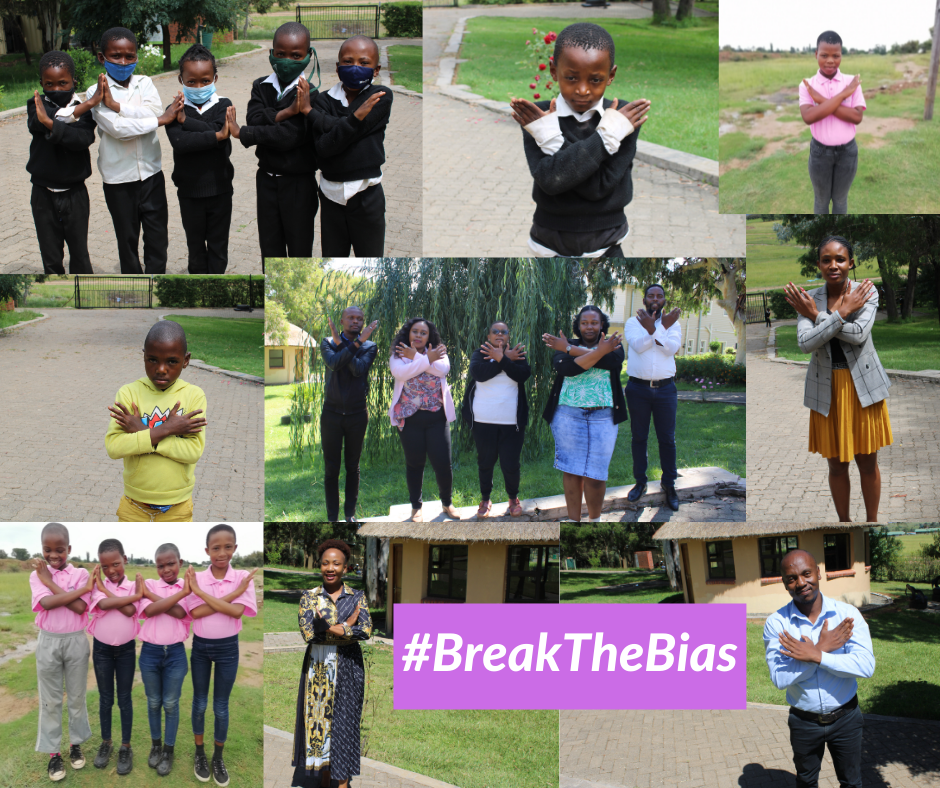 As Help Lesotho evolves, we move fervently to scale up our program strategies to educate community leaders and members on their explicit responsibility to create the social change required for girls and women to be safe and part of decision making in all facets of life. Since 2016, our GIRL4ce Program has delivered the message through drama, song and poetry. Our community dialogues train herd boys to educate and communicate with their local councilors on their rights and the rights of girls and women. All beneficiaries are trained to speak up to the elders, mothers-in-law, teachers, parents, guardians and local leaders on their rights. The impact is significant and in the end, the community leaders are appreciative:

“We are so empowered as leaders, from now onwards we understand that we have power to influence for social change and can keep the momentum going within our societies to support people vulnerable to Gender Based Violence because indeed it happens in our villages.”

“I was not aware of such a very important role of protecting the rights of women and girls as a politician. I have always been interested in political powers without realizing the responsibilities it comes with. Now I’m ready to make a difference in every corner of my community and those next to me.”

This scale-up includes increasing our programing for boys and men, for their own benefit, and as they are the usual perpetrators and conveyers of inequity. We have augmented the number of male participants from 20% to 35% over the past few years, despite our experience that donors are often reluctant to fund male programs. We have boys and men in various programs (Guys4Good for grade seven boys, the leadership programs and camps, sponsored children, Computer and Life Skills, GIRL4ce, for example). Funded almost entirely by another generous woman, the impact and reputation of our Herd Boy Program is significant. Some of these boys are as young as six when they start herding. One of the Chiefs in Berea, Ntate Mangana, said:

You definitely will want to watch this short video of these boys so far away and trying so hard to be good men.

We piloted a program to combine the herd boys with the out-of-school boys in the same village. In many ways, both groups are idle, prone to depression and substance abuse with limited prospects for their futures, and are often the abusers of the girls around them. Alas, bringing the two groups together did not work. Each group has unique challenges, different education levels, and deeply ingrained biases towards the other. The groupings had such different attitudes and contexts that they could not communicate or support each other. We now run programs for each group so they get the support they need to safely explore their challenges, emotions, and hopes for the future.

As the mother of three sons and grandmother of four young lads, these fragile boys break my heart. They are so wounded, but they actually thrive when given the support, attention, empathy and time to heal from their insecurities and lack of knowledge. When they explore how these negative, abusive sub-cultures sabotage their relationships with their families and girls they long to partner with, they start opening up to growth and eagerly grasp at new ideas to become young men they can respect. One staff wrote: “The boys say they are no longer forcing their girls into sexual activities but are choosing to communicate and discuss consent because they want better relationships”. From our multitude of reports here is a sample from our staff, as the boys can now:

Many of these boys do not know their HIV status as they are afraid to go to the clinics. We bring the health care providers to them, for testing and education about transmittable diseases, condoms, female reproduction etc.

Doing this math, if we helped close to 22,000 people last year, we reached over 7,700 boys and men. Multiply that by the number of years and we are reaching an enormous number of males with deep enough programing to create substantial social change.

And finally, I want to share this happy story. When COVID forced lockdowns, we were deeply concerned about the education and mental health of the children. Most have no real support, no books at home, often no table to study, light to read or educated parent to help. We were also concerned about our program alumni becoming depressed with all they have to cope with. We married the two concerns and called it ‘Limitless Horizons Volunteer Village Outreach’. Next week marks exactly one year since the project began.

In 2021 we had 96 alumni who volunteered 5,379 hours (av. 56 hours per volunteer) and reached 4,736 children (av. 49 children per volunteer). In 2022, just over half of the original volunteers continue their outreach activities and we are welcoming 30 new volunteers to the project this month. The alumni receive training in tutoring and basic listening skills to then work with children in their village to keep them motivated to learn and to provide basic psychosocial support. We have developed and distributed over 5,000 activity books, filled with COVID-19 education, math, literacy and science games and activities, motivational messages and coping strategies.

The project has been so successful that the guardians and parents have asked us to teach them how to better support the children in their education! Perhaps most rewarding is witnessing the pride the youth volunteers have in seeing their commitment to role modeling and helping others yield substantial impact. They are earning the respect of others in the community. They finally believe that they have what it takes to make a difference.

To learn more about the educational context in Lesotho right now you can check this out: https://reliefweb.int/report/lesotho/striving-build-better-future-children-through-education-lesotho

I sometimes struggle with what to include in these letters as there is so much to share, context to provide, people to thank and others to celebrate. In the course of a given series, I try to cover key areas but do let me know if you want special topics in either of the last two letters this season.

Be well my friends, embrace the day, know that you are appreciated.

If you will accept it, I send you a hug.

P.S. For those who are interested, this digital government of Lesotho flip brochure has lots of photos and information on various sectors. The font is small but you can enlarge any given page: https://heyzine.com/flip-book/a6669c2361.html