Meet the poetry winners for our STOP Gender-Based-Violence Campaign 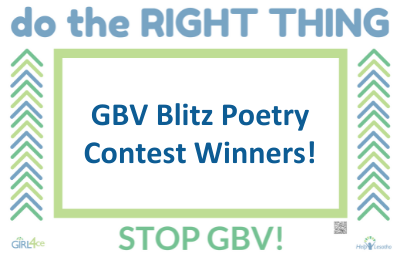 As part of the Help Lesotho GBV Blitz campaign in late 2020, youth in Lesotho were encouraged to submit essays and poems using the theme: What does it mean to ‘Do the Right Thing’ to stop gender-based violence in Lesotho? A total of 60 Basotho participated in the competition, sharing beautifully written poems and essays on the topic. Though a tough decision, four were selected as the contest winners and each writer received a smartphone prize! Read the four winning essays and poems below.

What does it mean to ‘stop gender based violence’ in Lesotho?
By: Likhapha Lehlabaphiri

Gender based violence is violence directed against a person because of that person’s gender or violence that affects persons of a particular gender extremely. Violence against women is understood as a violation of human rights and a form of discrimination against women and shall mean all acts of GBV that result in, or are likely to result in physical harm, sexual harm, psychological harm , economic harm or suffering to women.

To ‘Do the Right thing’ to stop GBV in Lesotho means raising awareness of the dangers of harmful traditions or cultural beliefs. It is believed by many Basotho communities that to be considered a “real” woman you have to be circumcised. This can be devastating impact on girls’ lives. We have to help rural families to learn about the facts and change their attitudes to help the practice come to an end.

Challenging and speaking about violence in the home means to ‘Do the Right thing’ to stop GBV in our country. Parents should raise issues concerning GBV with their children and means of mitigation. That would help children to be knowledgeable and recognize where there is GBV and how they help minimize or prevent it.

Engaging boys and young men to become agents of change means to ‘Do the Right thing’ to stop GBV in the mountain kingdom. To be effective, strategies must not only empower women, but also should include men and boys to bring about significant changes. This will help men and boys in ending patriarchal norms, gender inequality and GBV.

To ‘Do the Right thing’ to stop GBV in Lesotho means listening to girls’ experience of violence and their solutions. It is the first step in breaking the cycle of abuse when a woman shares her story of violence. Abused persons needs help and whatever help you can offer as a helper, you also have to listen to then what they think needs to be done in order for them to be helped.

Mobilizing youth to fight harmful practices such as child marriage means to ‘Do the Right thing’ to stop GBV in Lesotho. There is a sesotho saying that “Lets’oele le beta poho”, this simply means that we often tacle the biggest problem when we are many. As the youths of Lesotho, we have to stand and say it is enough with violating the rights of young children. I believe that when we are together, our voices will be heard that forces marriages have to come to an end, it is wrong as parents to force your child marry someone older that them and it is also wrong for an old man to be in a marriage alliance with a child.

In conclusion, GBV is a major issue in this country, it is happening and it is for us as individuals to prevent it nationwide. We have to help the victims of GBV to heal and believe in change.

You say you love her but is this the love she deserves
She keeps crawling at your feet begging for mercy
Neighbors saw her running outside half naked
They looked away because they claim they do no want trouble
Mahokela le hokae oeeee
Basotho ho senyehile kae?

I marched towards losing hope
I thought I would not cope
But something inside me awoken
If I speak, he won’t touch me again
I need to do the right thing
The words kept making an echo in my head

Let’s create posts everywhere
Hashtags all over
Make a noise
For our silence is too loud
STOP GENDER BASED VIOLENCE!!

So dear abusers
You feel you deserve a thank you right?
Am I am sorry it was my fault?
You should be ashamed of yourselves

Listen woman
It’s not your fault
The police, the psychologist, the neighbor
Yes you need to change your tune

You can’t kill me, sell my body parts
And sleep like a baby
How do you do it?

Let’s do the right thing
Teach our children to know that violence is bad
That our children speaking does not mean seeking attention
Raise awareness
Grow more than enough platforms
Approach media outlets, activists with all the confidence
Lets spit fire that awakens every man’s soul to desire to stop violence
Make it our goal to grow exponentially
To make a bigger difference in our small beautiful country
Leave no stone unturned
If we despise violence
We will fight it till justice prevails

Till Lesotho becomes a safe haven for all its citizens
Let’s see our women as precious jewels
We are responsible for change
Do the right thing
Stop Gender based violence!

What does it mean to do the right thing?
By: Poloko Mokoai

Patriarchy can be defined as an integral system which is consistent of male dominance enforced by violence which is often done on women. Gender-based violence is a product of toxic masculinity which is so rife in our societies. The endemic of gender-based violence is global phenomenon and Lesotho is no exception. Unfortunately, the convictions are not in alignment with the number of reported cases. In as much as some people may want to help eradicate abuse against women, they claim to not know what needs to be done to stop femicide. The essay will try to shed light in what it means to do the right thing.

People need to be educated on what gender-based violence is in order to know how to fight against the deadly social ill affecting our societies. Nelson Mandela said education is the most powerful weapon which we can use to change society. Gender-based violence is more than just raping women but also involves innocent micro-aggressions which make women uncomfortable. It can be a touch on her shoulder that makes her feel uneasy to the catcalling on the streets. Learning about the dynamics of gender-based violence will help people to know when they are crossing the line and to stop what they are doing. Moreover, it is quite clear that men do not necessarily understand what consent is and need to be taught about it. Consent is when two people are consciously in agreement for sexual activity to take place.

To do the right thing needs courage especially for men because speaking out could have them labelled as weaklings by their peers; but they need to speak out against rape culture. At social gatherings, men need to call out crude sexual comments said as jokes by their friends and to have conversations about what gender-based violence is. Instead of protecting their friends, they need to ostracize people in their circles who are part of the issue so as to discourage others from abusing women. Men tend to be enablers of abuse against women by applauding peers who claim to know how to put their women in line hence fixing the problem needs to begin with men to know what is right or not. For instance, boys in a group catcall-girls and make sexual comments while laughing which terrifies women. This culture has been long going for years and needs to be put to a stop.

Listening and believing victims is a step towards doing the right thing because it takes bravery to talk about an assault. Most women suffer in silence for fear of being blamed and humiliated when they speak up. When women report the crime, they take the first step towards breaking the cycle and stopping their abuser from doing the same to someone else. Furthermore, giving victims a safe space to talk about their abuse not only helps them have their sense of power back but also helps them deal with what happened and work towards the healing process. What`s more, victims will speak up without fear of being crucified or ostracized by their communities.

To fight against gender-based violence we need to dismantle the criminal justice system that is deeply rooted with patriarchy. The criminal justice system enables victimisation of women by allowing rapists to make bail and roam the streets freely. For example, a man was released on bail so he could prepare the funeral of the wife he murdered a few weeks ago. What`s worse, there has been cases reported whereby victims of sexual assault are mocked by police officers who take pleasure in asking them senseless questions and making the affected person keep repeating the event. The criminal justice system needs to protect women and children by imposing longer sentences for criminals and to work on rehabilitating them so that they can successfully be reintegrated back into the societies.

To infer, gender-based violence is destroying communities and need to be taken as a matter of emergence throughout the year not just during the 16 days of activism. For a country to be success, it first needs to root out toxic masculinity and work on equality for all genders. Doing the right is not just the responsibility of the government but for every person. As the Sesotho phrase states: letshoele le beta poho”. We all need to work together to combat GBV.